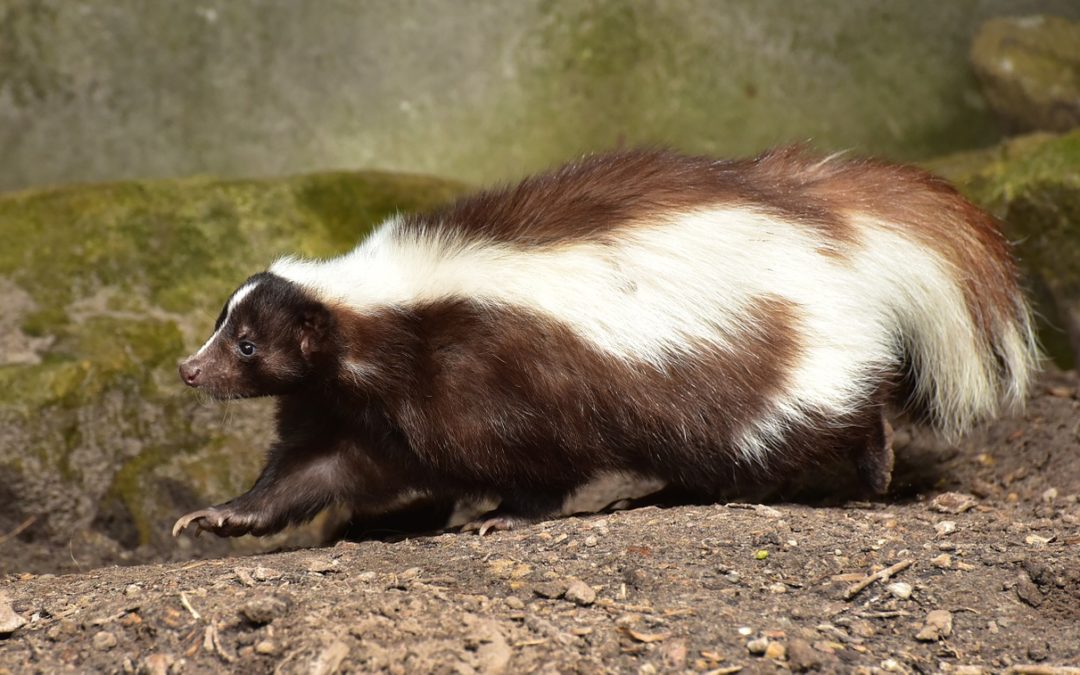 In Helium Heels a skunk makes a brief appearance. The small black and white furry animal, when frightened by the ghost babies, sprays them with a terrible smelling oily liquid, which quickly stinks up the whole barn. The ghost babies then had to be bathed in tomato juice just to remove the stench.

How much do we know about skunks and their smelly spray? Here are some facts:

The average lifespan of a skunk is two to four years in the wild and up to 10 years or more in captivity.

The color of a skunk’s coat can vary from black and white to cream, brown and gray.

Adult skunks range in length from 8 to 19 inches. Their tails can be 5 to 15 inches long.

Skunks have excellent senses of hearing and smell but very poor vision.

Skunks are nocturnal, so normally forage for food only at night.

Skunks are omnivores. They mostly eat fruits, insects, worms, reptiles, and rodents. They even eat venomous snakes, being immune to the venom.

Skunks are predators of honeybees. They will intentionally attack a beehive.

Skunks are famous for their ability to spray a liquid that smells extremely unpleasant.  When threatened, skunks release a powerful spray through their anal glands. This spray has a range up to 10 feet and can be smelled over a mile away. As a repellant technique, the spray is very effective. Predators will typically avoid skunks unless little other food is available. However, great horned owls are the main predators of skunks.  Owls, like most birds, have a poor sense of smell, which makes the skunk’s spray almost useless as a defense. The spray does not permanently hurt or damage animals, but leaves the other animal feeling uncomfortable. The smell can last days to weeks and is very difficult to get rid of.  A tomato juice bath helps, but some commercial products are more effective.

Skunks are not aggressive, only spraying in self-defense. They will always warn predators before spraying. A skunk that feels threatened will hiss, stamp its feet and raise its tail as warning signs. If the predator does not move, the skunk will spray them.

A skunk spray is highly flammable.

One out of every 1000 people on earth cannot smell skunk spray at all.

A group of skunks is called a surfeit.

Skunks are semi-popular pets in the United States. Most people have their pet’s scent glands removed, but some don’t.

Skunks usually mate in February, March, and April, depending on the age of the female and the harshness of the winter season. They are pregnant for 7 to 12 weeks and the young are born during the spring. A litter ranges from 1 to 10 kit’s (baby skunks), whose eyes remain closed for the first 21 days after birth.

Skunks can run at speeds up to 10 miles an hour.

Skunks can carry a number of disease-causing viruses and parasites that can be transmitted to humans and pets.  These include rabies, canine distemper, canine hepatitis, and intestinal roundworms.

Skunks do not hibernate, but can sleep for weeks at a time during the coldest parts of winter. Skunks usually nest in burrows abandoned by other animals, but also live in hollow logs and even abandoned buildings.

Image by sipa from Pixabay